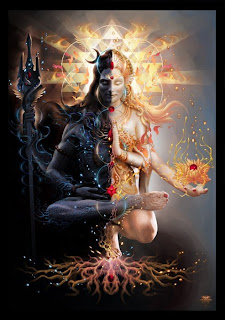 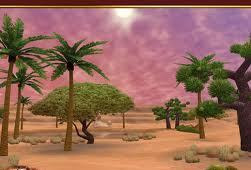 A young cloud was born in the midst of a great storm over the Mediterranean Sea, but he did not even have time to grow up there, for a strong wind pushed all the clouds towards Africa. As soon as the clouds reached the continent the climate changed . A bright sun was shining in the sky and stretched out beneath them, lay the golden sands of the Sahara. Since it almost never rains in the desert, the wind continued pushing the clouds towards the forests in the south. Meanwhile, as happens with young humans too, the young cloud decided to leave his parents and his older friends in order to discover the world. 'What are you doing' cried the wind. 'The desert's the same all over. Rejoin the other clouds, and we'll go to Central Africa where there are amazing mountains and trees!' But the young cloud, natural rebel, refused to obey, and, gradually, he dropped down until he found a gentle, generous breeze that allowed him to hover over the golden sands. After much toing and froing, he noticed that one of the dunes was smiling at him. He saw that the dune was also young, newly formed by the wind that had just passed over. He fell in love with her golden hair right there and then. 'Good morning', he said. 'what's life like down there?' 'I have the company of the other dunes, of the sun and the wind, and of the caravans that occasionally pass through here. Sometimes it's really hot, but it's still bearable. What's life like up there?' 'We have the sun and the wind too, but the good thing is that I can travel across the sky and see more things.' 'For me,' said the dune, 'life is short. When the wind returns from the forests, I will disappear.' 'And does that make you sad?'

'It makes me feel that I have no purpose in life.' 'I feel the same. As soon as another wind comes along, I'll go south and be transformed into rain but that is my destiny.' The dune hesitated for a moment, then said: 'did you know that here in the desert, we call the rain paradise?' 'I had no idea that I could ever be that important,' said the cloud proudly. 'I've heard other older dunes tell stories about the rain. They say that, after the rain, we are all covered with grass and flowers. But I'll never experience that, because in the desert it rains so rarely.' It was the cloud's turn to hesitate now. Then he smiled broadly and said:'if you like, I could rain on you now. I know I've only just got here, but I love you, and I'd like to stay here forever.' 'When I first saw you up in the sky, I fell in love with you too' said the dune. ' But if you transform your lovely white hair into rain, you will die.' 'Love never dies', said the cloud 'it is transformed, and, besides, I want to show you what paradise is like.' And he began to caress the dune with little drops of rain so that they could stay together for longer, until a rainbow appeared. The following day, the little dune was covered in flowers. Other clouds that passed over, heading for Africa thought that it must be part of the forest they were looking for and scattered more rain. Twenty years later, the dune had been transformed into an oasis that refreshed travellers with the shade of its trees. And all because, one day, a cloud fell in love, and was not afraid to give his life for that love.

conclusion is that ..."the result of selfless love is not a mirage but  abeautyful oasis"
saroj
Posted by saroj at 1:33 AM No comments: